The Meeting Agenda for January 3 can be found here.

The By The Horns Resource Guide can be found here.

This is the first By The Horns of the year! No one wasted any time getting back to business as usual. Familiar faces filled the chamber at City Hall for Tuesday’s hour and a half-long meeting. Don’t let the short run time fool you. The agenda items were noteworthy.

Is a new type of development project on the horizon in Durham?

Many of the developments presented to council have been on the outskirts of town in the county. According to… someone… it’s the most viable place to build the necessary housing needed to keep up with population growth. Suburban sprawl creates its own set of problems but without it, gentrification in the urban center will run rampant.

So I was intrigued when I read the address for the second agenda item: 3428 Hillsborough Road. Technically, the plot sits at the corner of N LaSalle St. and Sprunt Ave. I looked up the street view. The plot was an old shopping center that I recognized because there used to be a Blockbuster there. For a second, I thought I’d made a mistake. The name of the project is “Aura Hillandale West” so it must’ve been 3428 Hillandale Road.

A bunch of trees. A recent construction site across the street. Sounds about right, doesn’t it? Turns out it was the shopping center after all.

Trinsic Residential Group wants to develop over 300 units on the six-acre site. Residents in the neighboring area raised concerns about saving the trees and exacerbating traffic safety concerns. Hillsborough Road is what Not Just Bikes, a popular YouTube channel about urban design, would call a “Stroad.” Street + Road; The worst of both worlds.

Legitimate concerns aside, the project was well-received. There were no opponents to the project present at the meeting, and Planning Commission voted unanimously in favor.

The proposed rezoning allows repurposing a largely impervious single story retail lot with surface parking into nearly a 60 units/acre residential project, including 10% affordable units with the 387 total units. Importantly, the site is a short walk from existing bus service, and an easy direct commute via that existing line to one of the largest employers in the site. The applicant has committed to creating a transition area of publicly accessible park space along the street frontage, across the street from the existing residential. The applicant also commits to interspersing the affordable housing units in buildings throughout the project. All of these attributes make this a very positive proposal for reusing auto-dependent, underutilized impervious development for the benefit of the neighborhood and the community through a mix of market rate and affordable housing well located in the midst of existing infrastructure.

In theory, this project is a no-brainer. Not only does it bring substantially more housing into the urban core, but it should incite the city and state to reimagine the future of our transportation systems by prioritizing walking, biking, and busing and leaving the stroads behind.

I couldn’t help but think about what this kind of transformational development could do in other neighborhoods like The Village or Lakewood Shopping Center. As I said last year, The Village is “an asphalt desert” that’s been mostly untouched for decades.

But renewal can be a double-edged sword, and communities of color in Durham know that all too well. Major development projects are often the sign of gentrification to come, and the community is rarely offered any ownership stake. Even significant ownership, as we saw with Black Wall Street and Hayti in the early 1900s, gives no guarantees that your community can survive “the need for change.” But right now, the alternative is a sprawling concrete wasteland with little to offer the community as it stands. We shouldn’t let perfect be the enemy of progress but seen and unforeseen challenges await nonetheless.

Each One, Teach One

Nearly every person that gets up to represent a development project at city council, whether they are the land-use lawyer, engineer, landowner, contractor, or financier, is a middle-aged to old White man. Their teams and professional networks follow the same trend. Yet, many of the neighborhoods vulnerable to the effects of gentrification are historically or currently communities of color.

If we want to grow in an equitable way, there is an opportunity for our development community to mentor Black youth in Durham so they can take their communities into their own hands and not have to submit to the will of “market forces” generated by, you guessed it, middle-aged to old White men.

A great philosopher once wrote just now: “Give a man an affordable housing unit, he’ll sleep good for as long as the landlord will allow it. But if you teach a man to build his own housing for himself and his community, you create wealth and stability in that community for generations.”

If earlier in this post was the first time you encountered the Not Just Bikes YouTube channel, I can’t recommend it highly enough. There are tons of videos, typically 10-20 minutes long, covering all kinds of urban design models and what impacts their effectiveness. Because the creator is now based in Amsterdam, the videos frequently use Dutch and other European cities as the backdrop for any argument. We know. The Dutch do EVERYTHING perfect… with their 300 people that all look like clones.

This video is a great history lesson to start with.

As our community grows, we will be forced to make difficult choices. What would you sacrifice in service of the greater good? 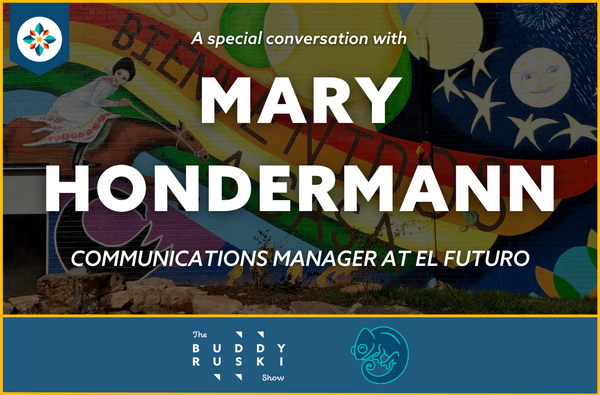 On this special episode of The Buddy Ruski Show, Justin interviews Mary Hondermann, Communications Manager at El Futuro ahead of another dance party fundraiser at Rubies in downtown Durham.